Piping and Forking in Haskell

This is not a scripting language but compiled. The reason is XMonad. Most people is still combined the Haskell Configuration, with BASH, conky, even Perl. Makes it looks like a Frankestein. We need a more unified approach.

And of course you have total Control of the script, e.g. color across the configuration, when you call from just one Haskell script, instead of many language.

A few things to be noted here: 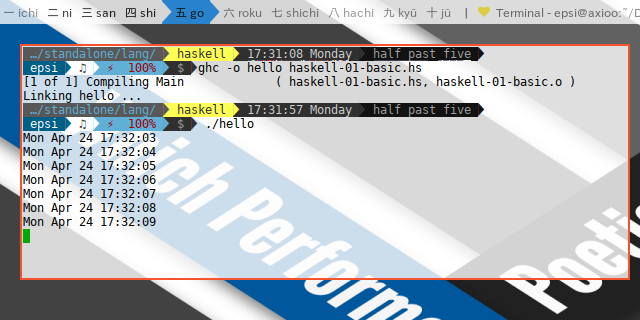 Haskell has no built in loop. Since we want infinite loop, we use Control Forever.

I add dirname, relative to the Haskell source, to locate the conky script assets. Source directory is irrelevant in Haskell, since Haskell is compiled, and can be execute from anywhere. But we’ll do it anyway for the sake of learning

We use this amazingly cool Haskell’s createProcess mechanism.

You can just remove this waitForProcess line to detach dzen2. No need to fork

The same as previous. But instead of reading from stdout std_out, it is managed by internal process using hPutStrLn.

Since we use forever control, it will block the process forever. So we do have to detach it using forkProcess.

Since we do not use forever control, we do not need to detach dzen2 using forkProcess.

But we still have to do forkProcess for transset. So it does not wait for wSleep 1. Or to be precise, delayed in the background.