If you are are coder, git is a must have tool that you should be familiar with, is git.

Git is a source code management tool created by Linus Torvald. This distributed version control system, manage your repository. It is fast, and also equipped with a lot of flexibility.

Using git is easy. It only takes a few commands. After a while, you have memorized the commands well.

In order to use git, you need to install git

In Arch, it is in extra repo.

There is a very popular free git website, github.com. Just sign up, and create a new repository.

After create a new repository, github will give a short notification similar to mine below.

I have already prepared my local git Directory. So every git commands must be within this local directory.

For daily updating, all you need is this command

I use it over and over again. Exactly in that sequence.

Luckily linux shell can remember the command, so you don’t need to type it again and again.

For convenience, I like to use powerline to show master repo in my shell. You can see in this figure, it shown in right position of the shell.

Unfortunately bash doesn’t support this feature, so I use fish instead.

You can see git in action in this figure bbelow 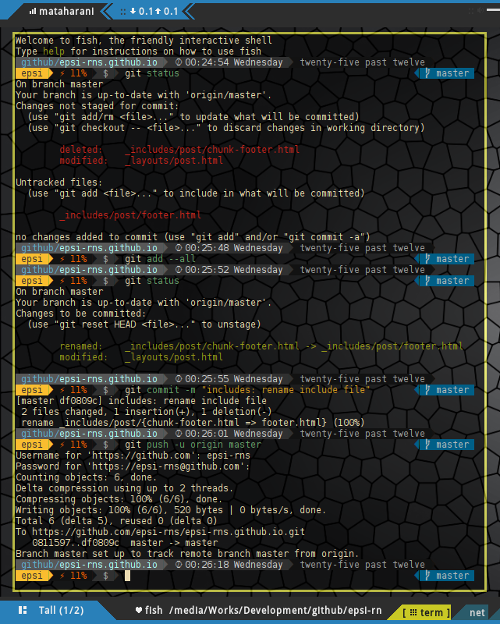 After a while you will get bored with those basic commands, then you might want to try a more geeky command. Just read git oficial documentation.

You can tag a specific point in your history, Here, is our recurring command.